Who should become EU Health Commissioner? 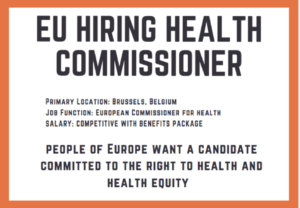 As the President-elect of the European Commission Ursula von der Leyen is expected to unveil the structure of the new College of Commissioners on Tuesday, September 10, Global Health Advocates joined forces with 43 civil society organisations from Europe to outline the ideal profile of Health Commissioner.

Civil society expects from the future Health Commissioner to take strategic leadership of putting people and their health at the centre of EU policy-making.

While the EU has a mandate to ensure a high level of protection of human health in all EU policies, in recent years health and well-being have gradually slipped down the EU’s political agenda, monopolised by growth, migration and security, which resulted in missed opportunities to decrease health inequalities.

Among others, the future Health Commissioner is expected to prioritise the public interest over those of economic and financial actors  and elaborate an explicit approach to deal with the commercial, economic, social and environmental determinants of health, ensuring that people’s right to health is not for sale. The full text can be found here.

The initiative is part of a broader civil society campaign to ensure the next European Commission  ensures a just transition toward a sustainable economy and society for all. A ‘job ad’ outlining the profile of ideal commissioner-candidates was published in July when the EU member states were putting forward their candidates. A civil society letter was directly addressed to the EU Heads of State ahead of the May 2019 Sibiu Summit, urging them to nominate right candidates.