The European Parliament Working Group (EPWG) on innovation, access to medicines and poverty-related diseases held its inaugural reception for the 2014-2019 legislature on Tuesday, 7 October 2014 with numerous MEPs including Margrete Auken, Elly Schlein, Michele Rivasi in attendance. 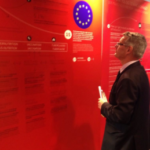 The outgoing chair MEP David Martin (S&D) spoke about the high prices of hepatitis C treatment as well as the current neglect of pharmaceutical companies concerning research into Ebola. He also seized the opportunity to introduce his successor MEP Glenis Willmott (S&D) who has a long track record working on 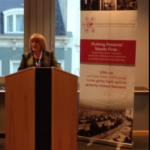 health issues at the EU level as a full member of the Environment, Public Health and Food Safety Committee. During her speech Ms Willmott called for a cross-party effort to current health challenges and expressed her commitment to greater transparency in the pharmaceutical industry in clinical trials. MEP Judith Sargentini (Greens) formally accepted to become the Working Group’s vice-chair for the Greens Group, given her interest in vaccines and increasing health access in developing countries. 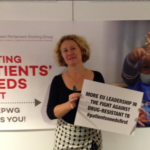 Veronique Lorenzo, Head of Health, Research and Education, DG DEVCO noted that the EC is interested in models of innovation that dissociate the cost of R&D from the price of the product while admitting that little was currently 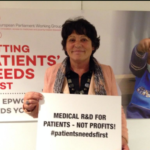 done in this regard. In a similar vein, Line Matthiessen, Head of Infectious Diseases Unit, DG Research underlined the Commission’s support for research targeting poverty-related diseases and the importance of the European Parliament’s support in this regard. Finally, Rohit Malpani, Director of Policy at the MSF Access to Medicines Campaign, added that the EU should refrain from exporting its own stringent standards for intellectual property right on developing countries and ensure that medicines become more affordable. 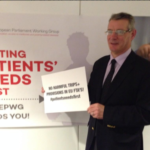 It thus seems that a sturdy foundation has been laid to build on the previous achievements of the Working Group which were made possible due to David Martin’s relentless support and efforts. These include the setting up of a strong Horizon 2020 framework that recognises the need to invest in R&D for poverty related and neglected diseases, the removal of some of the most damaging provisions from the EU-India FTA as well as two written declarations on immunisation of children and MDR TB in the European region.

The EPWG will continue working on ensuring improved access to medicines, tackling antimicrobial resistance and the inclusion of an ambitious, outcome-oriented and rights-based health goal in the post 2015 framework. Moreover, the Ebola crisis currently wreaking havoc in West Africa is a glaring reminder of the consequences of insufficient investment in health systems and global health R&D. Appeals made for cooperation between civil society and MEPs in order to build strong health systems and allow for greater access to medicines were thus very timely. 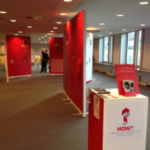 Participants had the opportunity to partake in an interactive exhibition tour depicting the barriers  to patient’s access to healthcare and medicines in developing countries. One of the stories recounted was that of a young child suffering from malnutrition in East Africa who had difficulty being diagnosed due to a lack of trained medical personnel in its country of origin. 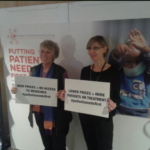 A “media corner” allowed for participants to express support for the causes of the EPWG by being photographed with a selection of signs such as “more EU leadership in the fight against drug-resistant TB”, “EU funded research should ensure access” and “high prices= no access to medicine”, with the hashtag #patientsneedsfirst, thereby spreading greater awareness about some of the most burning issues in global health and stimulating greater political interest.

We invite all those interested in experiencing the exhibition first-hand to stop by JANQ3 before the end of the week! To join the working group, please send an email to ep-accessgroup@msf.org