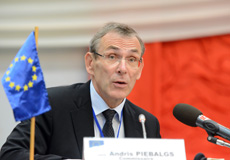 On 2 December, the European Commission (EC) announced that the European Union (EU) institutions will support the Global Fund to fight AIDS, Tuberculosis (TB) and Malaria with €370 million (over US $500 million) for the period 2014-2016. The pledge was announced by European Commissioner for Development, Andris Piebalgs, just one day after World AIDS Day at the Global Fund fourth replenishment conference in Washington.

While the pledge represents a 12% increase from the previous period (€330 million for 2011-2013), it falls short of the €450 million target set by civil society to reach a full replenishment of the Global Fund. “We welcome this important pledge from the European Commission but we would have expected a more ambitious commitment to fight AIDS, TB and Malaria from the second biggest development donor in the world” said Patrick Bertrand, Executive Director of Global Health Advocates.

The Global Fund is the single largest and most important international donor for TB, providing almost 90 percent of all international financing for TB programmes. Since its inception, Global Fund supported programmes have diagnosed and treated 9.7 million individuals with TB. The Global Fund is also the main founder for TB programmes in the World Health Organisation (WHO) European region, where TB kills seven people every hour and Multi-Drug Resistant TB is a major public health concern in many countries, including in the European Union.

In 2012, the WHO estimated that 74,000 cases of Multi-Drug Resistant TB (MDR-TB) occurred in the WHO European Region, accounting nearly a quarter of the global MDR-TB burden. Fifteen of the 27 high MDR-TB burden countries worldwide are located in the European Region. These include five EU Member states: Romania, Bulgaria, Estonia, Lithuania and Latvia. These statistics are especially alarming given the increased treatment costs for MDR-TB and its high indirect cost.

“If we consider that a recent study conservatively estimates that the economic cost of TB in the EU only amounts to €5.9 billion per year,  it becomes clear that the €123 million/year that the EU institutions will invest in the fight against AIDS, TB and Malaria is a very limited amount”, explained Mr Bertrand. Now that the Multiannual Financial Framework for 2014-2020 has been adopted, Global Health Advocates calls the EU institutions to deliver on its commitment towards global health and ensure that 20% of both geographic and thematic programmes of the Development Cooperation Instrument and the European Development Fund is invested in health and basic education. Global Health Advocates also calls the EU institutions to substantially increase its contribution to access to immunisation through the GAVI Alliance and to the fight against undernutrition by disbursing the 410 million euros pledged last June.